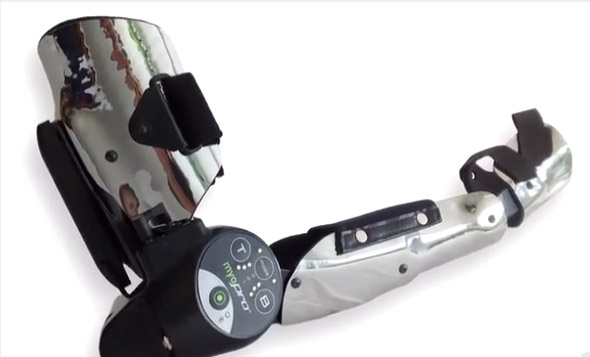 The Alfred Mann Foundation has created an incredible piece of prosthetic technology with a promising future. It’s chosen James Sides as the world’s first recipient, and he was more than eager to give it a whirl.

Sides is a retired Army Staff Sergeant who served two tours in Afghanistan. It was during his second tour that Sides encountered an IED in the road. He set out to disarm the explosive, but something went wrong during the procedure. The device detonated a few feet from where he was, blinding him in one eye and throwing him backward with sheer force.

Sides recalls trying to stagger himself back to standing when he realized that his forearm was broken, and his hand was gone. The blast had taken his hand clean off up to the wrist. Sides lived this nightmare and recovered, but life was never the same. Drinking water, for instance, was a difficult task with only one hand to hold the glass and do the action of pouring.

The Alfred Mann Foundation decided to help by giving James the gift of a robotic arm. The device is like something out of science fiction, with the appearance that it is based on telepathy. James had a small transceiver implanted within the muscles of his forearm. That device can read the movements of the muscles in James’ arm, then output that data in the form of movement. James’ artificial limb has 3 ranges of motion, and he can move each extremity. The process is not effortless, James still has to look at something and think about what he’s going to do, but future iterations will make this transition seamless.

Rogers & Cowan Executive Vice President Steve Doctrow led the promotional effort in an attempt to bring much needed attention to these devices. Through the use of sophisticated robotics, these people will begin to reclaim the parts of their lives they may feel were lost.