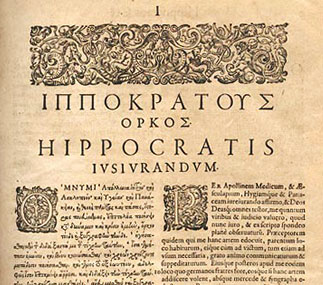 Most people outside the medical profession have probably heard about the Hippocratic Oath, but may have some misconceptions over it. The best example is the phrase “do no harm”, which does not actually exist in the text as written. The oath asks the doctor instead to prescribe a regiment to help the sick, utterly rejecting harm and mischief in the process. In that context, one could argue the oath protect patients from doctors performing exploratory surgery, which is also a good thing.

Scholars aren’t sure exactly when the oath appeared, or even if it was written by Hippocrates. Of the Greek Medical texts, and a surprising amount still exist, it is perhaps the most well known and most scrutinized. Hippocrates was the father of Western medicine, establishing early ideas for concepts doctors use every day in their line of work.

Today, the oath doesn’t hold the kind of weight it once did. It’s considered more of a rite of passage than a code of conduct, but it provided doctors a framework for what they could and could not do in the name of medical science. Otherwise, the history of transplants might involve sacrificing one person to save the life of another. That’s also why we question genetic modifications, designer babies and gene therapy in general.

World War II was extremely eye opening in that respect. Atrocities committed in the name of medical science gave the World Medical Association cause to revise the oath. Today, nearly every medical college in the United States uses the Hippocratic Oath, with some preferring the purity of the original over the altered version.